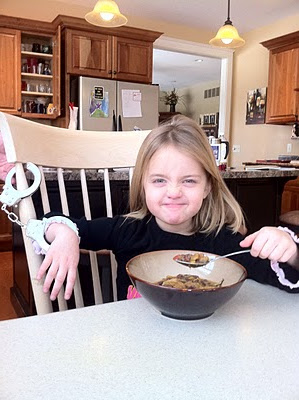 Anyone who has ever fed a child knows that no matter what you feed them, they are going to resist. From the first taste of a new formula or milk, to the first jar of peas or peaches, each new smell, flavor and texture is a process, and the first step always include spitting and maybe even vomit.

So we create routines and comfort, even songs and rewards, around eating– overselling our efforts like cheap car salesmen. And one day, apple oatmeal in the Dora bowl with the Superman spoon on the Mickey Mouse placemat is the only acceptable option for all three meals. But a week later, the same magical combination invokes a temper tantrum worthy of YouTube, and we’re back to playing airplane with strained bananas.

So many factors play into a child’s bipolar appetite. Growth spurts, siblings, millions of marketing images, teeth (or lack thereof), taste buds, texture, hot and cold, interested dogs and curious cats, attention span, energy levels, parental reaction and past experiences. The very least of these factors is probably the actual compatibility of the food with the child’s palate.

I’ve heard that a food has to be introduced SEVEN times before a child accepts it. And according to the anectdotal evidence that I’ve been collecting for the last 14 years, this is a ridiculously inaccurate underestimate. You ask me how I get my kids to eat kale and beans? Well, the same way every other parent feeds their child. I do and I don’t. Go to the Burger King playground and listen to all the parents insisting that a child “finish that hamburger and fries before playtime”, and check out all of the food thrown on the floor, stuffed in wrappers and thrown away.

Getting kids to eat ANYTHING requires Nobel Peace Prize-worthy ingenuity and patience, SWAT team-level negotiation skills, and government intelligence training in manipulation and subterfuge. At any given meal, whoever is smarter, richer and more stubborn has the best shot at winning the game, but there are no sure bets. The taste of defeat is bitter, and goes best coupled with a nice Merlot. 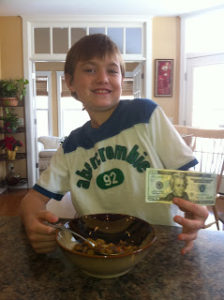 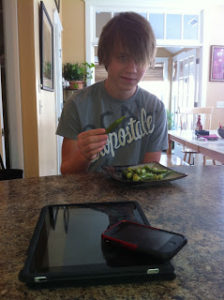 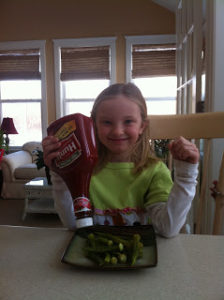 My first approach was to transition the children gradually…limiting their animal products, processed foods and snacks and asking them to just try my meals. And that completely DID NOT WORK.They had no interest (i.e. motivation) to eat the food I was cooking because they would just hold out and sneak a PB&J sandwich, eat a freezer pizza or blow through a box of cereal when I wasn’t looking. There became a flourishing black market for contraband in my upstairs…hidden food, secret codes, barters for favors, cash and candy. Strange, unmarked packages came from UPS addressed to my 13 year old.  I was actually quite impressed with the little mobsters. They weren’t arguing with me or each other, and they were happily supportive of my new vegan efforts. But there was too much eye contact, weird hand-signals and positive team spirit at the table….Big Red Flags. So, phase 2 was complete immersion. I bought nothing that wasn’t vegan, and I stopped buying unlimited amounts of bread and peanut butter. There were no chips, cereal or frozen pizzas. The kitchen landscape was barren and my children began to look….thin and hungry. Aghhhh…I was finally getting somewhere. Next, I attempted to indoctrinate them emotionally, and had them view Food Inc, SuperSize Me, and some horrific documentaries showing slaughter houses and chicken farms so that they could glimpse a little of the reality that was fueling my passion. But emotions fade as appetite rises, so their childish convictions rightfully and expectedly wain with the tide.

For the next few months, I put unbelievable stress on myself to make three vegan meals a day for each member of my family, no matter how many different directions we were running. No matter who was going where, I cooked in advance and filled coolers and baskets with appropriate fare. I sent lunch boxes, brown bags, and trays of separately made pizza, soy dogs, shamburgers and snacks to school, parties and friends. There was no eating out, no stopping for something quick and no compromises. Within six months, I needed a vacation in the psychiatric ward.

But it was all part of the process. It’s been four years, and my kids have not starved or developed any malnourishment diseases. In fact, they are thriving. They will tell you “Our mom is vegan, so we are too at home”….Which is GREAT! (But stay out of their way at the Pizza Hut Buffet line!) The foods and flavors I’ve introduced my kids to are not the usual American cuisine….But who wants to be normal? I’ve learned how to camouflage the massive amounts of vegetables I include in my dishes (BLENDER!), and they’ve learned that beans do not mean daddy lost his job. And ketchup still goes a long way to disguise nutritious substances. They’ve learned to text their dad a wish list if he’s stopping at the grocery, and though I hear the rustling of bags and the whispered exchange of goods and services, I don’t mind as long as they come to the table hungry and act appropriately grateful for my efforts. I don’t buy snacks and extras on a regular basis, but a Friday night party is just that, and I try to create vegan treats that qualify as junk food.

So how do you get your kids to eat what you cook? First you cook it. Then you serve it, and sit with them while they investigate it. Give them your opinion on it. (I don’t like everything I make!) Let them explore the tastes and texture. I often tell my kids they can ‘pick out’ one or two things…and then take pride in all the good stuff they are still eating. And a little hunger goes a long way. No one is going to starve. Kids in third world countries stand in line for hours just to receive a small portion of bland rice or mush or ANYTHING. I’m just saying. Picky is directly proportional to choice.

And then you may negotiate a certain number of bites. You might get angry and throw the dish in the sink, and you may quietly surrender to their opposition and eat it all yourself. They may go to bed hungry, and they may find mercy in a PB&J sandwich.

It’s all part of the process, and it’s the same in every home, regardless of the type of food you cook or how picky you think your kids are. It’s a comedy of errors, an exercise in futility and a journey of love. And it is SO worth it!