The American Heart Association is Full of Bologna!

But if being healthy was as simple as parking the car at the far end of the lot and taking the stairs, we wouldn’t have more than half of our population overweight. People want to enjoy life; feeling, looking and being the best you can be shouldn’t just be for celebrities.

It’s a given that the 40 billion dollars a year diet industry needs reliable cash cows to purchase the latest book, pill or “special” food. Jenny Craig and Curves are business models designed to create profit. They need you to keep coming back for more. And when sign up with them in search of motivation, camaraderie, and direction, we get that we’re going to pay for their products and services.

I’ve spent a lot of time writing about how the USDA and the FDA are run by special interest groups and large corporations that lobby the products they are peddling into our national diet. Got milk? Beef: it’s what’s for dinner! and Pork: the other white meat… are all USDA certified campaigns designed to sell commodities, not create health. Organic vegetable farmers can’t compete and need not apply.

Let’s talk about lunch meat for a minute.

Regardless of your status as vegan, vegetarian, flexitarian or caveman, most of us are aware that cured and processed products such as cold cuts and pepperoni do not qualify as health food, and are not good for you.

The American Heart Association recommends keeping salt intake below about 1,500 mg a day for most people. A single slice of bologna contains more than 300 mg of sodium. Even low-sodium turkey breast contains about 200 mg of salt per slice. Sodium nitrite and sodium nitrate are commonly used as preservatives in pre-packaged lunch meats. Both have been linked to cancer and lung disease. These preservatives may also trigger migraines in susceptible individuals.

Sodium nitrites are widely regarded as cancer-causing and toxic. The USDA actually tried to ban it in the 1970’s, but was vetoed by food manufacturers who claim there is no alternative that can prevent meat from turning a profit-busting putrid gray.

In May of 2011, the American Institute for Cancer Research released results of an ongoing study that links 3.5 ounces of processed meat every day to a 36 percent higher risk of developing colorectal cancer than a person who eats no processed meat. A 2005 University of Hawaii study showed that regular consumption of processed meats increased the risk of pancrratic cancer by 67 percent.

Consider how much bacon and sausage are eaten at Bob Evans each morning or pastrami and salami are served “fresh” at Subway each day, and you can see how those numbers might affect someone you love.

In fact, there is a lot of information out there that suggests we should avoid processed meats completely.

The World Cancer Research Fund (WCRF) has just completed a detailed review of more than 7,000 clinical studies covering links between diet and cancer. Its conclusion is rocking the health world with startling bluntness: Processed meats are too dangerous for human consumption.

Consumers should stop buying and eating all processed meat products for the rest of their lives.

So now, here’s my point. I was shocked recently to be handed a cookbook at a health fair that was published by the American Heart Association. On the cover was a picture for chicken nuggets, stamped as kid-approved, and on the first page was this advertisement: 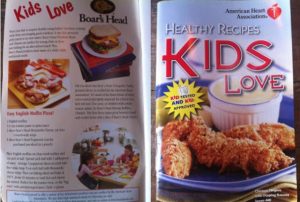 Ads for Crisco and Vytorin (cholesterol medication) had pretty pictures of happy people and good food.

The amount of money that the food industry currently spends on marketing and advertising to influence what children choose to eat, is twice the amount spent a decade ago. Young children 12 and under are especially vulnerable to these marketing and advertising strategies because they are developmentally less able to comprehend their intent. (I got this information from the horse’s mouth…I mean the AHA website).  Then I saw this advertisement on the Boars Head page.

Excuse me, American Heart Association… Why are you endorsing, certifying and promoting BBQ Bologna in your cookbook? In what world is BBQ bologna a health food?

Could it be that the American Heart Association has received $1.1 million (and an annual renewal potential of about $300,000) from food manufacturers as license fees to use the “heart check mark”?

Could it be that the American Heart Association is funded by the very corporations making American’s sick?Wake up!