If you have a juicer, you may have discovered a potential downside to creating wonderful green juices made of kale, chard, spinach and an apple. What do you do with the left over pulp? Discarding all that wonderful byproduct is simply not an option. And since the fruit and the vegetables end up mixed together, it’s not exactly a soup starter.

As an educated, intelligent adult, I was dismayed, and verbally discussing the issue with my interested dogs when the eavesdropping eight year old suggested that I take the veggie pulp out BEFORE I juice the fruits.

It was a light bulb moment to say the least! Common sense is not to be overrated. I began to place my vegetable pulp in a storage bag in the freezer. By the next week, I had the perfect amount to create a thai stir fry that was a delicious blend of all things green.

But after a conversation with a raw vegan who described beautiful fruit leathers and vegetable crackers, I has my eye on a shiny new object. The Excalibur Dehydrator was over $400, and I needed it asap.

Just before making my one-click purchase on Amazon, I read The Verdict, by fellow blogger, A Midlife Vegan, who discussed the reality behind the dehydration process: it’s a huge time investment. Ultimately, she’s an avid gardner and is happy to put her pulp to good use in the compost pile.

Raw foodies tout the benefits of consuming foods that have never been cooked, thus preserving all the living enzymes, antioxidants and probiotics. And the techniques and the recipes they have are amazing and delicious, I don’t care who you are!

I believe in the benefits, and try to include as much raw or at least minimally cooked veggies, nuts and fruits in my meals as possible. But I don’t have 9-10 hours to make a cracker. I’m not always a realist, but this consideration was enough to delay the purchase.

My raw vegan friend then told me that I could accomplish the same thing via the oven if I turn the heat down to 115. And since I don’t necessarily need it to be rule-book raw, I selected the lowest setting available @170 degrees and decided to try it before I buy it.

I took the pulp from my juicer, which included a bunch of kale, a bag of baby spinach and a stalk of celery. I made my kids drink the juice (after I added a pear) and placed the pulp in my food processor. If you don’t juice, add whatever greens you have available to a food processor.

Then flavor with whatever veggies you prefer. In this batch, I added red pepper, 4 cloves of garlic, a few tablespoons of gomasio (toasted sesame seeds) and a squirt of Earthbound Farm Organic Crushed Fresh Chili Pepper.  Four tablespoons of ground flax meal serve as a binding agent.  I let it whir for a few minutes and studied the consistency.

I really wanted to make crunchy crackers, but I was willing to settle for soft wraps. My friend had told me the thicker the batter, the quicker the “crunchy” is produced. I added a “bit more flax” seed meal.

I placed a sheet of wax paper (ok if you aren’t using high heat) and spread the batter to about 1/8th inch thick. I placed in my oven.

Nearly 4 hours later, I had the tortilla shells I was after. The wax paper pealed away easily, and I used a pizza cutter to create strips, on which I spread hummus and a pile of green leaf lettuce. The kids loved it! 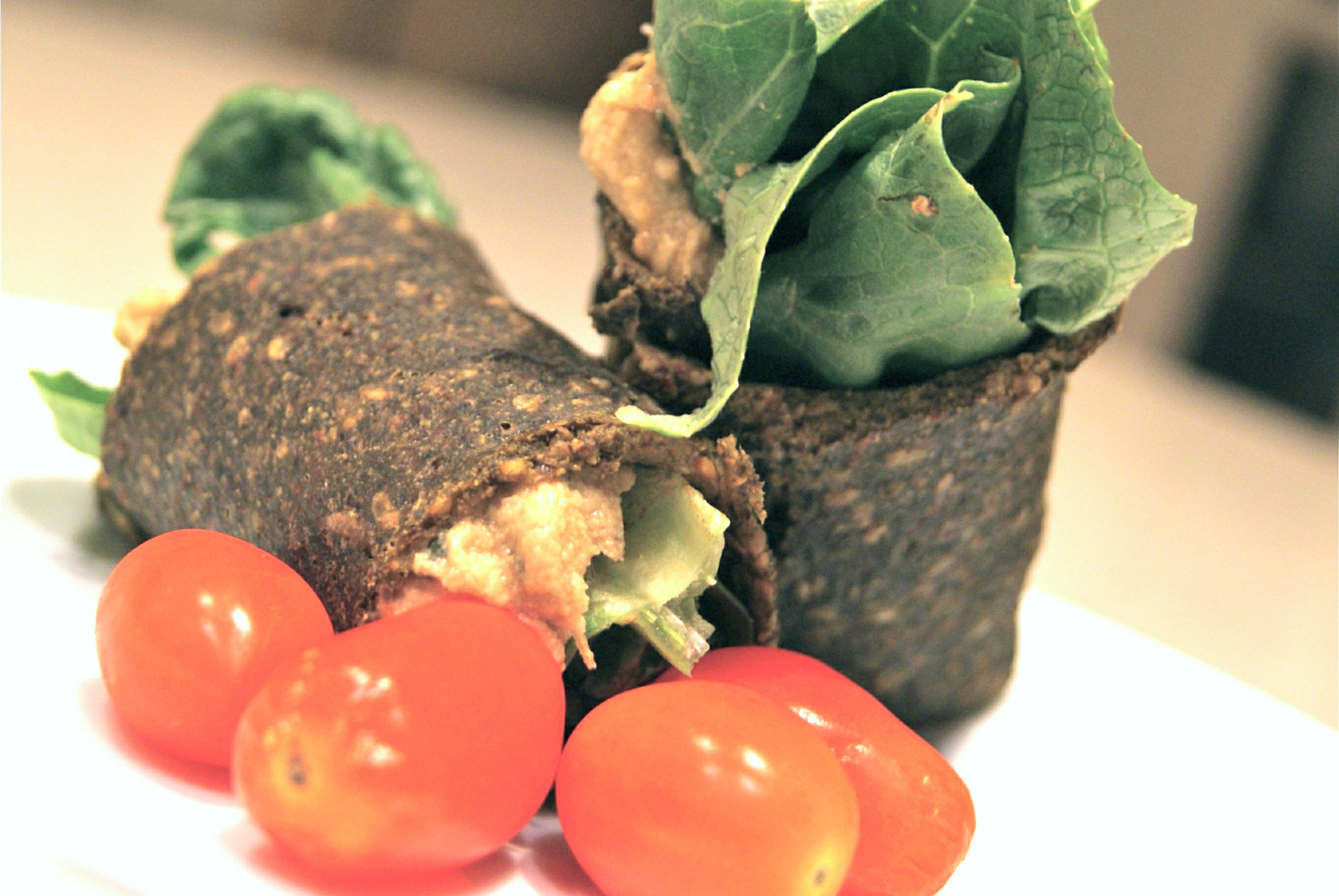 I left them out overnight wondering what the difference is between stale and crunchy. In the morning, they were still soft, so I threw them in the toaster (forgetting about the whole point of it being raw, but I hadn’t had my coffee yet!) and got tasty little squares that went great with salsa.

If you want them to be like crackers, just keep them in them in the oven longer….

I wouldn’t try this before hosting a dinner party, but it wasn’t that big of a deal on a snowy school night. When I make them again, I’m going to double my batter and do a cookie sheet on each oven rack. The heat is so low that it doesn’t even feel like it’s on, so alternating between racks every few hours should keep things even, if only take a little longer.

They were really good!