Things got a little crazy today at lunch when we ran out of peanut butter.  As I am sure you know, it’s a never-ending chore keeping the pantry and refrigerator stocked with the daily “necessities.”  Peanut butter is a big one in our house, so I try to make sure there are no

Running out of a daily staple can create a sense of emergency akin to a winter storm warning that forecasts the ‘storm of the century’; and it can be fun to make do with what is in stock. I noticed there were a few jars of unsalted peanuts in the pantry.  I eyed them suspiciously, glared at my Cuisinart, and wondered out-loud, “If the machine at Fresh Market just grinds the peanuts and it makes butter…is it possible I could do the same?” 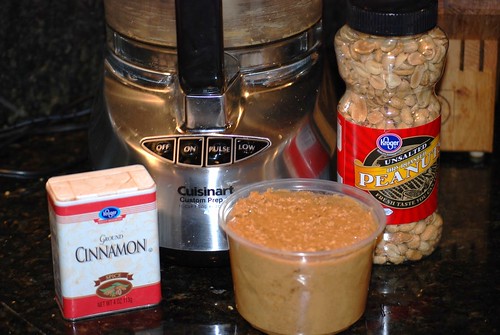 My keen sense in connecting the dots payed off. At first I thought my experiment was a failure.  The peanuts simply ground into a fine, powdery substance, and I considered adding oil. But patience is a virtue. I ran the machine on for a little longer, and, “Voila!”–the powdery substance began to thicken and congeal into a thick, peanut butter blob.  I turned it on again for a few minutes and it became a smooth, creamy peanut butter, just like we buy at the store… and way cheaper!

Save gas, save money. Cha-ching! Feeling witty and inspired, I wanted to experiment with different flavors.  I added cinnamon. It made cinnamon peanut butter.  I added raisins and discovered raisin peanut butter. On a roll, I ground almonds and making almond butter, which was also tasty with cinnamon. I guess I’m just that good.

As they say, necessity is the father of invention. But creativity is the mother of childhood emergencies. Crisis averted.

Who knew peanut butter could be so simple?