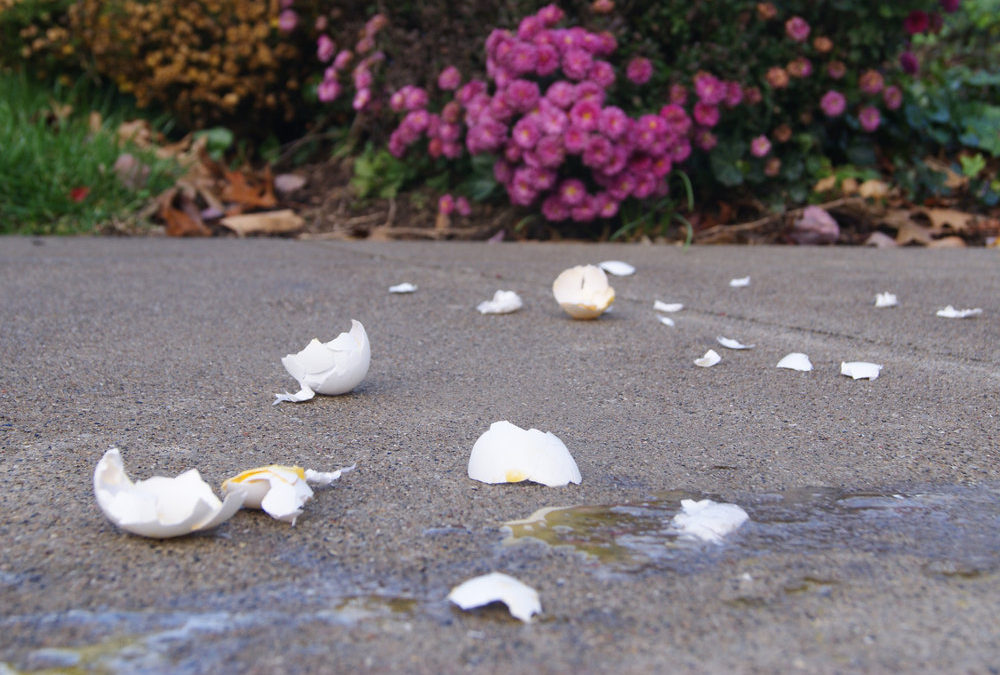 I guess my Party Pooper costume was a hit . . .

We got egged last night. I’m guessing it was because I didn’t pass out candy for Trick or Treaters. Normally, I pass out cutie oranges. But our street gets very little traffic and I didn’t want to answer the door all by myself only to disappoint. I pretend not to see the eye rolls behind the masks as I toss the orange goodwill into the seas of candy. But it’s a trick, not a treat by definition. So this year, I left the light off and played the happy chauffeur for my kids and their friends.

I love Halloween. Typically, our home features a graveyard filled with the undead, man-eating spiders, and spooky music with synchronized strobe lights. But I’ve been traveling the last few weeks. I didn’t have time for all of my favorite costumes and decorations. Yesterday, it was all I could do to make a good meal so that my kids might fill their bellies with something healthy before heading to Jonestown for the kool-aid party.

The analogy may be extreme, but mass-suicide usually is. We’ve been brainwashed by Big Food into buying poisons wrapped in pretty packages. Every holiday, birthday and party is now defined by the candy and crap that is corroding our insides and destroying our health. That’s not an exaggeration. It is an absolute fact that diet is the primary cause of disability and death in this country. According to current projections, 44 percent of Americans will be obese by 2030 — not overweight or heavy, but obese. Half of us will get cancer. Most of us need daily medications to manage the side effects of the standard American diet. We’re now cracking open chests, surgically banding stomachs and injecting ourselves with insulin in defense of our diet.

It’s Jonestown on a much bigger scale. But nobody wants to hear that. Blaming the Food Bullies  is downright blasphemy. Messengers are shot (or egged) on sight.

I recently wrote a (not so popular) article called Kid Food Kills to explain that one piece of candy is about as safe as one cigarette. I asked people to consider how they would feel if their kids were given the choice between menthol and regular instead of Snickers and Milky Ways. I was blasted with comments like, “For God’s sake let kids be kids! Just stupid!” and “All good things in moderation is key,” and “don’t deprive yourself. This causes overindulgence,” and “it’s one night, and kids don’t have to eat it all. Give me a break. It’s for fun.”

Huh? Kids don’t have to eat it all. But they do. So do adults. Candy (and endless junk food) is everywhere, every day. My own kids came home last night with pillowcases filled with poison, as did all their friends. That’s not a good thing. It’s not moderation. It’s complete overindulgence. Why do we collectively agree to the illusion that eating crap that makes us sick is fun? Is it fun to deal with allergies, asthma, digestive disorders, depression and anxiety, inflammation, weight gain and all of the potential diseases we face?

Feeling good is fun. Life is so much better when the act of eating is based on foods that heal, nourish and energize the body, mind and spirit. Cooking my Halloween-inspired buffalo tempeh soup and homemade sourdough bread was FUN. I went to the store and bought the ingredients and spent about an hour in the kitchen. The same amount of money and time could have been used to buy candy (or cuties) and prepare for trick or treaters. Instead, I chose to prepare something my kids need, instead of something they want. (I made them do their homework too.)

I’m not going to pretend that cleaning up smashed eggs is a feel-good venture. But I’ll treat this Halloween Hangover with leftover soup and sourdough bread and move on . . . Buffalo tempeh in a cauliflower cream base with tomatoes, kale and smoke-seasoned onions, homemade sourdough bread topped with cashew cream, made with love.