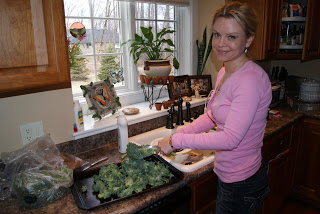 Three times a day, we all face the same decision. What are we going to eat? Go out?… Order in?… Open a box or a bag?…who’s turn is it to cook?…did anyone go to the store? And what I want to eat often doesn’t mesh with what my family wants, and by the time negotiations are over, I’ve got at least one pouter, one “mmm…can’t wait” (that’s me), and random mumblings that I choose not to hear.

Most meals begin with a stack of vegetables on the counter, ready to meet the Cutco knife. But where those vegetables come is my focus today.

Walking through the grocery presents a dizzying array of choices. Most of us fall into familiar brands and products because it’s just easier than revisiting questions that are hard to answer…namely, organic or conventional? 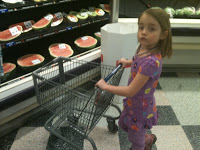 In my experience, the organic is always more expensive..unless it’s going bad and marked down to encourage the purchase. And why is it mostly organic food found in the bargain bin? Have you ever noticed that? Those yellow stickers at Kroger declaring “Price Reduction” are usually stuck to the originally higher priced organic.

Why? Because good food goes bad.

If you’ve seen Morgan Spurlock’s “SuperSize Me” documentary, he did a little science project and left out seven random food items. As expected, the organic apple was first to get mushy and brown. The ‘winners’ of his contest were McDonalds french fries. 10 weeks after setting them out, the fries hadn’t even started to decompose. I just found a guy on YouTube who’s got the same experiment with the fries, and is at 2 years, 22 days and counting. No mold, no fruit flies…nada. As Spurlocks points out, “If the bugs won’t eat it, that is saying something”. Yeah. Seriously.

I also learned that conventional apples we buy from the grocery store can be up to ONE YEAR OLD. And yet they are still shiny, juicy and red, waiting for Snow White to take a bite.  A product called “SmartFresh” makes this possible. I-MCP is the chemical badass developed at North Carolina State designed to inhibit the release of ethylene in produce, which ripens and softens the fruit. BTW: low levels of impurities in SmartFresh can be carcinogenic.

Indeed, there are over 14,000 man-made chemicals added to the American food supply. To be fair, washing your produce can remove many of these toxins…though you can’t wash the GMO’s out (which are not allowed in organic labeled products) or the chemicals found in all the pre-packaged items we buy. Don’t believe me? Try washing your bread or crackers… I guarantee that’s gonna be problematic.

Also, it’s never been conclusively shown that organic foods contain higher levels of nutrients than conventional produce. Many studies have tried, but the truth is nutrient levels are too intertwined with other factors such as growing conditions, season, storage, transportation and preparation style. I could take a risk and say that an apple that’s been sitting in cold storage for a year just can’t contain as many nutritional perks as the one picked straight from the tree, but that’s an ASSumption and you know what they say…

So if organic isn’t the vitamin-packed punch it’s sold to be, why bother breaking the bank for produce that isn’t shiny enough to check your teeth?

Let’s start with herbicides, pesticides and insecticides, and in meat, antibiotics. A study published by the National Institute of Environmental Sciences in 2006 found a significant decrease of malathion and chloropyrifos (pesticides) in the urine samples of school-aged kids after just one week on organic diets. (“dropped to zero” is rather significant…) Low-level chronic exposure in children to pesticides can lead to neurological and developmental maladies, contribute to asthma, childhood cancers and a host of other diseases, according to studies done by the National Cancer Institute and the EPA’s Agricultural Health Studies. *

Next, the environmental effects of conventional agriculture are huge. These chemicals pollute the waterways and our drinking supply, harm wildlife and ecosystems, add to soil erosion and are detrimental to the vitality and productivity of soil.

In contrast, organic farming methods decrease carbon dioxide and other greenhouse gases, use 30-50 percent less water, and create sustainable farmlands where soil, insects, flowers and crops coevolve in harmony. The produce are often unique in shape, size and color (as opposed to the clones of perfection we’ve come to expect), the farms are labor intensive and their products have much shorter shelf lives.

I think it’s safe to say that most organic produce TASTES better (if it’s fresh). And instinctively, we know that brighter colors and sweeter flavors are the better choice. But don’t let the chemicals fool you. Just because a spray tan, highlights and teeth whitener make me look healthy doesn’t mean I am, and the bright orange carrot I’m holding might have been one chair over at the salon if it’s not organic.

Finally, consider that if we don’t support organic food with our wallets, those growers will go out of business. We’ll be destined to eat spray-painted but tasteless food that contaminates our bodies and our environment, brought to us from far far away in planes, trains and automobiles.

Even if you can’t buy it all, buy some organic. If you live in Fort Wayne, Indy, Columbus, Dayton, Cincinnati or Louisville, check out www.greenbeandelivery.com.They bring it right to your door.

*Read more about pesticide effects in children at http://www.ncbi.nlm.nih.gov/pmc/articles/PMC1566222/