Do I Need a Vitamix? A Tale of Four Appliances 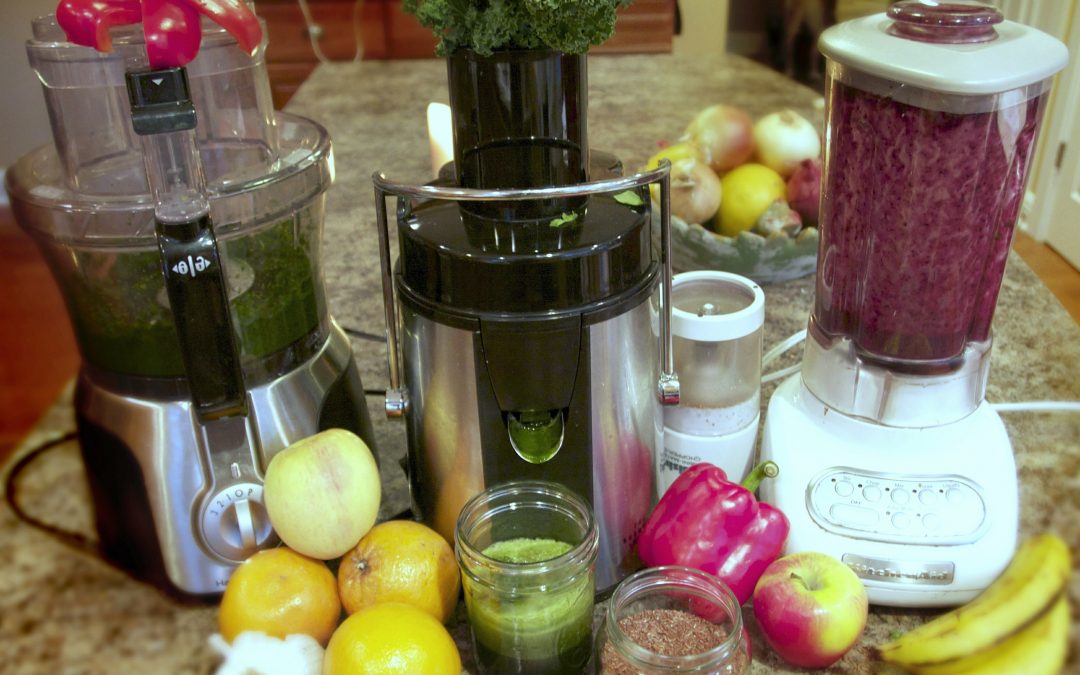 I’ve only heard about juicing through my yoga practice. It is widely believed that going on a juice fast delivers macro-amounts of micronutrients directly to your bloodstream, while letting your digestive tract take a rest.

But my digestive system doesn’t get tired often. It does get hungry every few hours, though. Vegetable juice might work as an appetizer or a palette cleanser between courses, but I’m going to need some substance.

The HVH (hot vegan husband) requested that I look into juicing after he read some articles on it and became interested. After browsing, my official opinion was quick and uneducated: why throw out the fiber? Just eat your vegetables!

But when I watched the documentary Fat, Sick and Nearly Dead, about a man at the cross-roads of his health who decides to go big or go home; my skepticism became vulnerable. He embarks on a 60 day juice fast and finds life-saving health. I decided to buy a mid grade version for about $100. I’ve been hearing about the Vitamix*  which is touted as the best thing ever, but even a refurbished model starts at $350.

I spent the $100. Then I put it in the pantry, where it remained unopened for three months.

The tipping point that brought the juicer to life was an impending case of the sniffles, and the words CONCENTRATED SHOT OF MICRONUTRIENTS were all I could remember. I wasn’t hungry; my throat hurt. I had no sense of smell. I found some kale, carrots, spinach and an apple, juiced them and took a sip. It was very good. I poured a small glass for each kid and held dinner hostage. One (who is in my witness protection program) asked for seconds.

Drinking the juice in little shot glasses became a fun part of our morning routine–not every day, but a couple times a week. When my kids ask for smoothies, I start with a green juice base, and then add it to the blender with blue or blackberries (which help hide the color) along with a banana, apple, orange and/or pear. I usually throw in flax for a nutty flavor, enough ice to fill it to the top and a tbsp of honey or agave. They drink it like soda pop!

I take my veggie pulp and put it in my food processor, along with fresh garlic and peppers and create the batter for Raw Vegan Wraps/Crackers.

*A word about the ever so popular Vitamix. I’ve heard they are amazing. They blend like no blender before them, and considering you could get an old car for the same price, they should. The Vitamix is not a juicer. So there is no left-over pulp. And evidently, on the right setting, it will turn fruit into an ice-cream-like consistency. If you have the cash, go for it! But I already have a nice food processor, a decent blender, an adequate juicer, and even a small grinder. So while there are a probably a lot more dishes I could create, I can still accomplish wonderful things with what I’ve got.  And if I’m wrong, don’t tell me just yet (or do, of course…)

note: Since writing this post, I have purchased a Vitamix and absolutely love it. I made the decision as I was developing the banana sorbet and fresh mint ice cream with chocolate chips. My food processor just couldn’t handle the bananas. The investment is paying off exponentially as I now make my own vegan butter, homemade peanut butter, soy milk and even laundry detergent. Start saving for your Vitamix. Seriously.