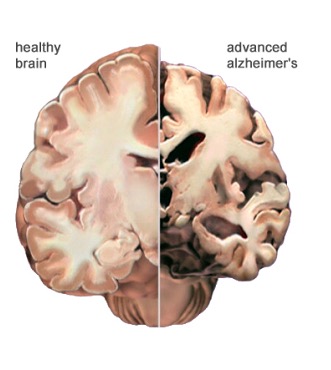 Currently, 5.4 million Americans have been diagnosed with Alzheimer’s Disease. It is the 6th leading cause of death, and disease rates have risen by 66 percent since 2000. It is a horrific disease that eats holes into the brain, causing dementia, blindness, epilepsy, muscular and neurological degeneration. There are no treatments to delay, stop or reverse the progression.

There are no lab tests to confirm a diagnosis; doctors make inferences based on symptoms. Alzheimer’s disease can only be verified with a brain biopsy, done post-mortem. Less than 10 percent of atypical dementia patients are autopsied, so there are few records to indicate the accuracy of diagnosis. New research has shown that Alzheimer’s disease is caused by an infectious pathogenic protein called a prion, which forms plaque in the brain.

Prions are also responsible for Creutzfeldt Jakob Disease (CJD), which is the human form of bovine spongiform encephalopathy (BSE), or mad cow disease. The same brain disease, when found in sheep is known as “scarpie”. Symptoms and progression vary between strains and species, but the end result is the same.

In a recent study, 13 percent of Alzheimer’s patients were conclusively found after their deaths to actually have CJG. Meaning they actually had mad cow disease.

BSE, scarpie and variant strains of CJD are transferred when infected tissue (meat) is consumed. But ‘meat’ is not always symptomatic; pigs are usually slaughtered at 5 months, which is too early to detect symptoms. Depending on whether they are meant for dairy or beef, cows are slaughtered between 3 and 9 years of age. By comparison, CJD in humans can have an incubation period over several decades.

How do livestock contact the disease, as they are naturally vegetarian? Animal feed is made with slaughterhouse waste, manure and blood. Plant protein sources can cost up to 30 percent more, so the entire animal is ‘recycled’.

Strains of encephalopathy can cross species, and lie dormant for years. They can also withstand heat of up to 680 degrees (which can melt lead).

In the United States, there are hundreds of thousands of “downer” animals taken to slaughter each year. “Downer” means they are too sick or crippled to walk. But they are still alive, so their meat is legally harvestable. In Japan, every cow destined for human consumption is tested for mad cow. In the U.S., 1 in every 75,000 is tested. The meat industry spends a lot of money successfully lobbying for little to no regulation in these matters.

We know that livestock can infect humans with a disease that destroys the brain. We know that this disease has similar pathology and prognosis as Alzheimer’s. Yet we test neither the animals we intend to eat, nor human victims for conclusive proof or record keeping. How will we ever find a cure for the disease if we don’t even know who has it or what causes it? Could mad cow disease be a factor in dementia and Alzheimer’s?