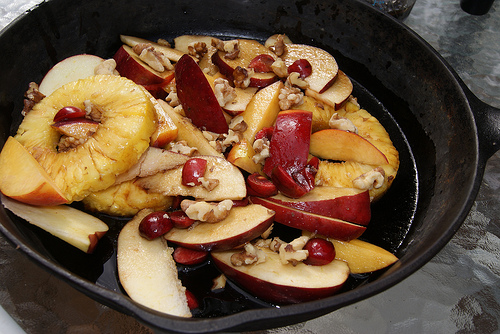 Living in West Virginia for a few years, I learned to love things au naturale. I make cocktails in ball jars,

But one thing about the Wild and Wonderful state continued to perplex me: everyone has a cast-iron skillet on their stove-top. What’s up with that? Old-school vintage may be the new high fashion, but I believed non-stick cookware to be a perk of the future.

But when my mom bequeathed the cast iron skillet that my great-grandmother (1897-1985) used her entire life, I was nostalgic enough to try it. And while there’s no infomercial with a b-list celebrity inspiring loyalty to a brand, a little research revealed what new technology has forgotten.

Benefits of Cooking in Cast Iron:

How to Season or Re-Season a Cast Iron Skillet: For new cast iron skillets, or rust spots, uneven color, and poor results with sticky-food, you’ll need to season, or cure it.

Cover the bottom of the skillet with a thick layer of salt. Add 1 cup of a vegetable-based cooking oil and heat until oil begins to smoke. Pour the oil/salt mixture into a bowl and use a “wad” of paper towels to rub the inside of the pan until it’s smooth. Put oil/salt back into the pan and bake at 350 for one hour. Pour off oil/salt and rub the cast iron with the wad of towels one last time. You now have a seasoned cast-iron skillet. Cook away!