Cauliflower crust pizza sounds like a concept better left unexplored. I’ll admit it. But when a friend made it for our family, it had a flavor that was unexpectedly remarkable. Cauliflower crust stands alone before you even add the “pizza”. But it was messy; breaking apart into gooey delicious chunks. I researched tons of cauliflower crust pizza recipes, and they presented several challenges. They require egg and cheese. I tried substituting flax seed and vegan cheese; and was able to reproduce the flavor and texture. But the crust wasn’t something you could pick up with your hands. It was delicious and worth the effort, but I kept playing with it, eventually adding a gluten free baking mix. I’d like to say the 3rd time was the charm, but I stopped counting after ten. But what I can say is that the hard work payed off, and I’ve got two variations of OUTSTANDING cauliflower pizza crust. Bon Appetite! I cook everything to scale for an army, so feel free to cut this recipe in half. OR,  freeze what you don’t use for easy access to future fast food. 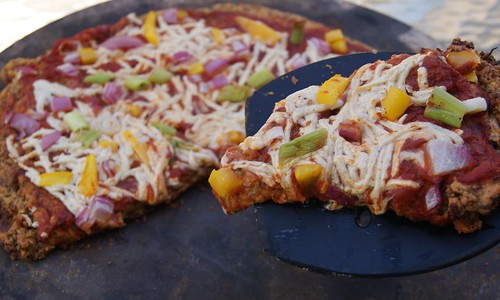